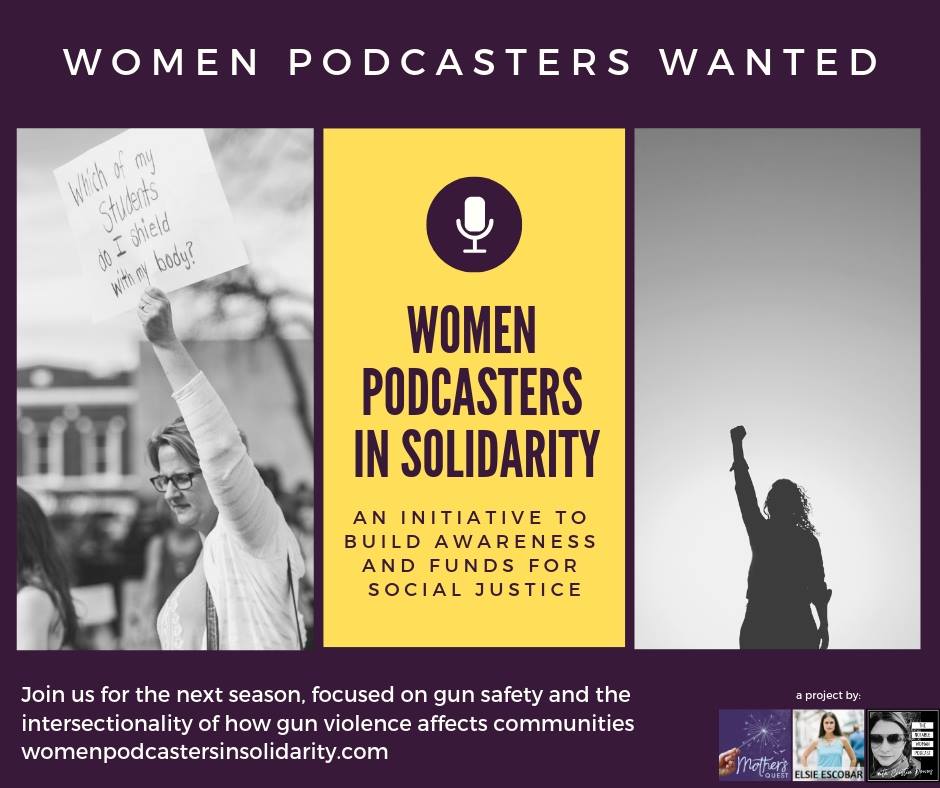 Almost two years ago now, I woke up to news of the events at the Charlottesville Rally and decided I could not be silent and do nothing. I decided I had a responsibility to use my voice and the platform I was building with the Mother’s Quest Podcast to shine a light on social justice issues. And, that if I could make that commitment, other women podcasters might too. Many of you said “yes” and those episodes recorded for the first season, on anti-racism and police brutality, are up at www.womenpodcastersinsolidarity.com.

A second season, still under way, focuses on the intersectional impact of gun violence. Tragically, there have been so many mass shootings since we made the decision to center this second season on this topic…I can’t count. And thousands of incidences of gun violence that do not receive news coverage,  disproportionately impacting communities of color.

Last weekend’s events, two mass shootings within 24 hours, blasted our consciousness with the work still ahead and urgency to fight gun violence. As importantly, they call us to address the racism and toxic masculinity that has been a consistent through-line between both seasons. This season, I’m grateful for the opportunity I had to speak with Gloria Pan of MomsRising, decades long gun safety advocate Lad Everitt, Trayvon Martin’s mother Sybrina Fulton who founded the Circle of Mothers and the Trayvon Martin Foundation after the tragic loss of her son, and most recently, Will Latif Little, who after taking the life of a young man through gun violence has transformed his life and answered the call to stop others from making the same mistake.

Though a few of these episodes are from a year + ago, and some of the resources and events are not current, the discussions are as relevant as ever. And, if you’re looking for deeper understanding and for some action you can take, I hope you’ll listen to one of these today.

Finally, if you’re a woman podcaster and you want to join Women Podcasters in Solidarity yourself, visit the website and come over to our facebook group. We’re still looking for more episodes on this topic and hope you’ll create courageous conversation of your own. We need your voice and to reach your audiences with discussions that can deepen our understanding and catalyze action. In this episode, Gloria shares about her upbringing in an Asian-American immigrant family, the impact of her mother’s experience working in the UN during the Women’s Movement, and whether the idea of living an E.P.I.C. life is relevant for MomsRising mothers, many of whom are struggling to meet basic needs. We delve into the E.P.I.C. guideposts from the lens of gun safety advocacy, explore the ways in which we can broaden our lens to make that advocacy intersectional, and Gloria gives us specific actionable challenges to get involved and make a difference. Ep 64: Fatherhood, Forgiveness and Redemption with Poet Will Little Will has a profound story to tell, one that began with an upbringing in a single family parent home with his four sisters in Philadelphia, PA. Without his father or a father figure, and impacted by his environment, Will began to venture away from the ideals he was shaped by in church, dropping out of high school in the 10th grade, and becoming involved in the Philadelphia drug trade and a shooting that resulted in the death of a young man. This ultimately landed Will in prison for a 10-20 year sentence on a murder conviction at the age of 19. Ultimately, this episode is about hope and transformation…And I hope you’ll be forever changed, as I have been, by your connection to Will and his story.