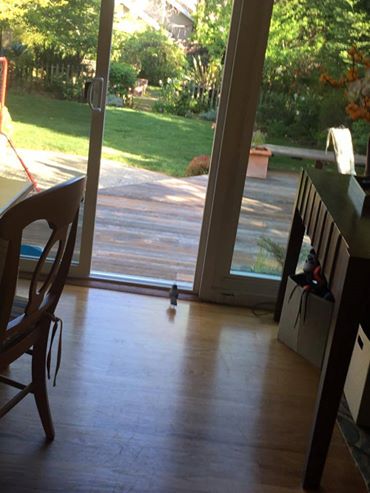 Have been dreaming more about launching “Mother’s Quest,” a website and social enterprise, with coaching, workshops and retreats, a blog and podcast, and eventually a marketplace and venture-fund…all to support mothers on a quest to become the best mothers they can be, use their unique gifts to make the difference in the world, and invest in and nurture themselves to make those things possible.

Facebook reminded me this morning that it was a year ago today since I first invited people to participate in a pilot Mother’s Quest workshop. I saw the “Memory” on my feed and admit I felt trapped, frustrated that I haven’t taken more action to fulfill this dream.

And then literally moments later this happened…

My three-year old son Jake and I realized that a bird had flown into our house. The poor bird was frantically flying into windows, moving toward the light but crashing into the glass barrier every time.

At first, we were scared by the thudding of the bird and ran upstairs. But after a few breaths, I realized I just needed to go down and open our back door so it could find its way. I opened the door, and it was less than a minute before the bird flew out.

Message from the Universe – Open the Door

I stood at the door and thought fleetingly that perhaps this was a message from the universe. The bird was a fitting metaphor for where I am in my quest to create this enterprise right now. I try moving toward a bright vision, but feel like I keep crashing against barriers, and may need someone to open a door for me.

I watched the bird that escaped as it walked around my back porch. For some reason, it wasn’t flying away. I wondered whether it had injured a wing. Then, I heard flapping again, and realized there was a second bird trapped inside. It was as if the other bird was waiting for the one inside before it would take flight. I opened the door again, and the second bird hopped right out. To make sure I hadn’t imagined the whole thing, I took a photo of the bird walking out and of the two birds perched together afterwards on a nearby tree.

I decided the universe didn’t believe I got the message the first time and so sent it again to drive the point. I figured I better sit down, write the story and share it. Only as I began typing the story, did I realize there was another message that the second bird was delivering. No one else is going to open a door for me, until I open the door myself.

Mothers Too Can Answer the Call

I have been reading a lot about the “Hero’s Journey,” inspired originally by a conversation Elizabeth Gilbert had with Oprah on my favorite show, “Super Soul Sunday.” Joseph Campbell, famed anthropologist, says there are key elements to every journey, including the moment when the hero answers the “call” and when the hero finds the needed mentors to help light the way along the arduous journey. He believed only men however need to take this journey; women, as the child-birthing nurturers they are, have already arrived at the destination the men are searching for. But, I agree with Maureen Murdock, who in her book, “The Heroine’s Journey,” refutes this notion and believes women have a quest of their own to take.

Today, I commit to answering the call. To take bold action and provide a living example to myself, other women and my children that mothers too can and should be the hero in our own journeys.