It started with the Three of Swords: How a Tarot Card helped me heal and begin moving forward again after the election 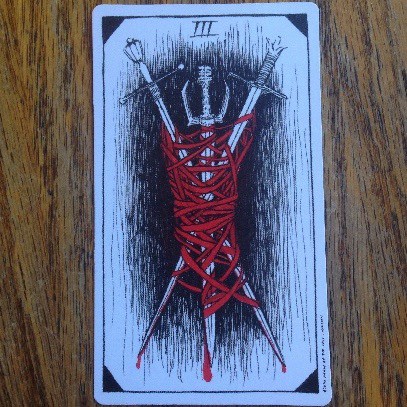 It wasn’t supposed to feel this way. I had been awaiting my 45th birthday with positive anticipation. Months before, I decided this milestone would represent a mid-life renaissance, one where I consciously choose to live my E.P.I.C. life and launch my first deeply personal venture, Mother’s Quest.

But, in the month before my intended “launch,” my son came down with pneumonia and then had a relapse. Sleepless nights and fit-filled days kept me from attending to the “work” needed to be ready.

And, then the election results came in. I wasn’t prepared for the wave of fear, disappointment, and anxiety that moved through me. In the week that followed, my son healed and returned to school, but my heart still felt heavy and I could not bring myself to do the work ahead. I wondered if I should postpone the launch of my podcast. If I moved forward, there would be no prepared launch sequence or beautiful website for listeners to delve in deeper.

The Three of Swords: Betrayal, Heartbreak and Turmoil
From time to time, I draw tarot cards, not because I believe they will predict my future, but because I have found they can spark a helpful internal reflection. As I read the description for the card I drew, “Betrayal, heartbreak, turmoil…A dark and complex card, the Three of Swords is rarely a welcome sight,” I was surprised by how much its description matched how I have been feeling. The final words, “wait for your heart and spirit to mend” before making any decisions struck a profound chord.

One of the tenets of Mother’s Quest is to attend to yourself as well as your children, and to reach out to a support network so you are not alone. So, I decided to set up a session with Navjit Kandola, a spiritual healer and coach who was the first mother I interviewed for the podcast.

Releasing any sense of vanity as I cried on our video call, I described the events that led me to this day, the fear and exhaustion from my son’s pneumonia, the uncertainty about whether to launch, and the despair I was feeling about our country in the wake of the election. I explained that I felt like I was swinging from moments of almost manic pro-activeness to total defeat, and that more than anything though, I felt I was suppressing tears always just beneath the surface.

Integrating my emotions, not releasing…
I expected that Navjit was going to help me release it all, and that somehow afterward, I would feel more clear. What happened instead, through a prompt to draw on wisdom from my younger self, felt far more powerful.

Navjit asked me to remember a time in my childhood when I felt afraid but overcame it. I flashed to a moment when my little nine year old body faced down a ferocious dog living next door. I lived on the top of a long hill and each day would walk up the driveway to get to my home. Our neighbor’s dog would follow me up the driveway, on the other side of a fence, barking and growling alongside me as I walked. I had the sense that the dog would tear me to shreds if not for the fence between us.

One day, my dog Phoebe got out and was attacked and badly injured by the neighbor’s dog. As my mom tended to Phoebe and prepared to take her to the vet, the neighbor’s dog came up the hill. I have a vivid memory of standing tall and yelling at that dog, filled with rage and a desire to protect, that caused the dog I had always been so frightened of to retreat down the hill.

Navjit asked me what I imagined next and I immediately had an image of being inside my house with Phoebe, hugging her and telling her how much I loved her. And, then another image emerged, one that didn’t actually happen, but felt very real. I could see my nine year old self sitting at the top of the hill, Phoebe next to me. I was pouring out the love I felt for her, but also being vigilant. I knew that a ferocious dog was just below and I was not about to let it hurt her again.

In that moment, I realized that what I needed was not to release the full range of emotions, from fear and despair to love and hopefulness. What I needed was to bring all those emotions together, to integrate them fully, so that I can stay grounded now at the top of a hill, valuing and honoring all I hold dear and standing watch to protect and champion them.

Ifeel like I am breathing now for the first time in over a week, and though moments of fear, sadness and outrage still come, instead of pushing them down, I am breathing them in, mixing them with equal parts hopefulness and love, and a commitment to do my part to take action. I feel called to act in a way I never have before, in a way I know my own mother did while fighting for civil rights in the 1960’s. I will follow in her footsteps.

In the same way I keep learning to let go of my fixed expectations for my children as I raise them and to honor, even if I don’t embrace, the challenging times along with the times of ease, I know I should move forward even though things don’t feel perfect.

I must use my gifts and experience to make whatever unique difference I can. For me, that is creating inspiration, coaching and community through Mother’s Quest, so mothers can live their E.P.I.C. lives and inspire their children to do the same. In many ways, this feels more relevant and needed than ever.

So, come December 1st, the Mother’s Quest podcast will be birthed,not as I originally envisioned it, with me feeling 100% inspired, with a launch party or a website, with the first President who is also a mother headed to the White House. But, I will release it to the world with honesty, with reverence for the darkness and the light, and with the hope that at least one mother out there may need the messages within to move forward herself.