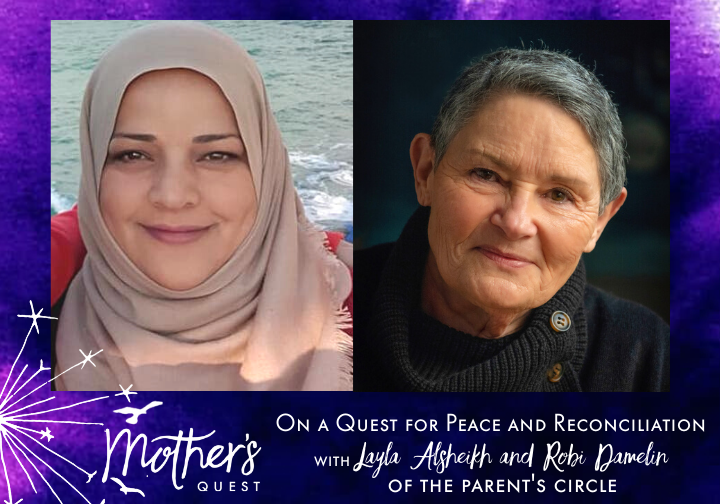 I’m honored to share this special episode of the Mother’s Quest Podcast. Thank you for showing up to this important conversation about two mothers and their quest for peace and reconciliation in Palestine and Israel. Thank you for choosing to press play.

If ever there was a year demanding us to “show up” this has been one. From COVID to floods and fires and refugee crises…our consciousness has had a lot to hold. It can be all too easy to shut down. To throw up our hands. And to say “what can I do?”

That question “what can I do?” is one I asked myself during the crisis that unfolded in Palestine and Israel In May of 2021. For days, watching the horrifying headlines, I felt powerless. Then several truths came to me and an intention to find a path to action which I shared in a FB post, like sending a wish to the universe.

The very next day, the “guides” I was looking for appeared.  In a conversation with my mother, I learned about the Parents Circle, an incredible organization of Palestinians and Israelis who have lost children or family members in the conflict, and instead of turning to revenge, come together to work toward peace and reconciliation.

Soon after, I found myself recording a conversation with Layla Alsheikh, a Palestinian mother originally born in Jordan, who lost her son Qussay at the age of 6 months old. And Robi Damelin,  an Israeli mother, originally from South Africa, who lost her adult son David while he was serving in the army.

Although today’s topic is especially heavy – one of loss and tremendous grief, Layla and Robi share their narratives with us for a specific purpose – to help us understand their experience and to support their efforts in bringing Palestinian and Israeli mothers in particular together to work toward change.

Inspired by all they shared with me, the week after we recorded, I began to raise money toward a fund to help them bring together bereaved Palestinian and Israeli mothers of the Parents Circle.

Along the way, I’ve been moved by so many mothers who have already contributed. Mothers like Jena Schwartz, who dedicates this episode with a beautiful poem she shares at the end of this conversation. Jena was the first to donate and her powerful words are an invitation to you to say “yes” to this cause.

To date we have raised $5,000, half of the $10,000 goal I set. And we have more to go. Though the height of the crisis in May has receded from the headlines, violence continues in many forms, and the path for peace and reconciliation is needed more than ever.

I ask you to listen with an open heart, to follow the links in the show notes to learn more, to contribute in any amount meaningful to you, and to amplify the voices of Layla, Robi and others like them, mothers closest to this conflict. They are a key to any path forward.

In this episode we explore:

Both Layla and Robi challenge us to join them in fighting for peace instead of violence in the following ways:

Layla Alsheikh was born and raised in Jordan. She had a peaceful and normal upbringing and graduated with a degree in accounting and business management. She eventually met her husband in Jordan 1999 and moved to Bethlehem, where her husband lived for the wedding. However, a few years later tragedy struck her life.

In 2002, her 6 months old son, Qussay, became ill and Israeli soldiers prevented Layla from taking him to the hospital for more than five hours. Qussay soon died from the lack of timely treatment.

Layla joined the Parents Circle in 2016. Following her son’s death, she never thought of revenge, but rather has devoted her time and energy to ensuring a better, more peaceful future for her children.

Robi Damelin was originally from South Africa and came to Israel in 1967. She originally came to Israel as a volunteer after the “Six Day War”. Her real plan was to live in the states but after spending time in Israel she developed a love-hate relationship with the place. She eventually got married and had two kids here.

Unfortunately, Robi’s son, David, was killed by a Palestinian sniper in 2002 while guarding a checkpoint near a settlement during his army reserve service. She speaks to Israelis, Palestinians, and audiences all over the world to demand that reconciliation be a part of any peace agreement. Robi was named a 2015 Woman of Impact by Women in the World.

About the Parents Circle
The Parents Circle – Families Forum is a joint Israeli-Palestinian organization made up of more than 600 bereaved families. Their common bond is that they have lost a close family member to the conflict. But instead of choosing revenge, they have chosen a path of reconciliation.

American Friends of the Parents Circle – Families Forum shares the human side of the Israeli-Palestinian conflict with the American public in order to foster a peace and reconciliation process.

Connect with the Parents Circle

This Episode is Dedicated by: Jena Schwartz

Jena Schwartz is a writing coach, poet, and activist in Western Massachusetts whose work is deeply rooted in Jewish values. As a mother herself, “The Undefended Heart” emerged as a prayer of sorts out of her own yearning for peace in the face of so much injustice and suffering in Israel/Palestine.

Jena brings her unique brand of fierce encouragement to helping writers of all kinds get words on the page and out into the world. Learn more about her work and feel free to reach out to her at www.jenaschwartz.com.

Special thanks to Shehla Faizi, Kris Zarnoch, Jen Fornal, and Bear Beat Productions for their help and care in editing this episode

Original FB Post That Set the Intention For This Episode:

“Swirling in a sea of uncertainty

I don’t know enough, I tell myself

But deep down, feel this to be untrue

In the quiet of my late-night scrolling, searching for answers I never find, instead I reveal some truths within.

We are all deeply connected

The harm to one mother and her child is harm to every mother and every child, regardless of our differences

Extremism in any form becomes a cancer

Silence and doing nothing is a choice. A choice I cannot make.

So I will remember I am not alone

There are guides all around me

And ways to make an impact that will reveal themselves

If I just take the first step.”