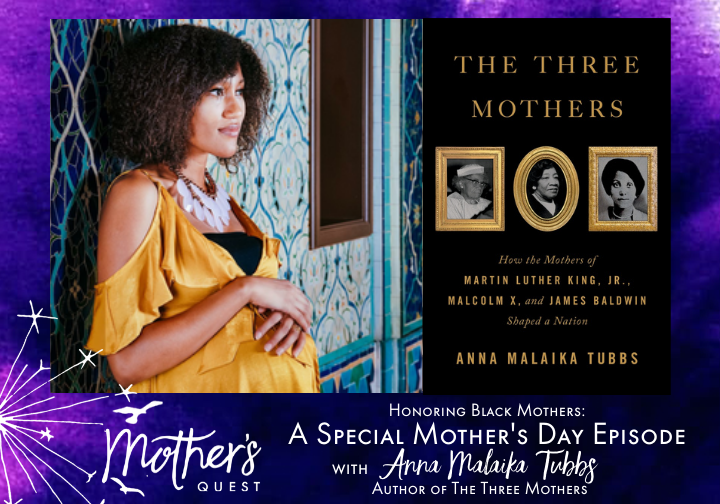 Welcome to Season Six of the Mother’s Quest Podcast and this special Mother’s Day episode, which shines a light on the untold stories and far-reaching impact of mothers and in particular Black mothers. For this episode, I had the honor of talking with Anna Malaika Tubbs, the brilliant biographer of the groundbreaking book The Three Mothers: How the Mothers of Martin Luther King, Jr, Malcolm X, and James Baldwin Shaped a Nation.

In addition to being a mother to a 1 year old boy and pregnant with another child, Anna is an author, advocate, educator, scholar and Ph.D. candidate in Sociology at the University of Cambridge. Growing up abroad and influenced by her exposure to all kinds of cultures and beliefs, and by her own mother’s work advocating internationally for women’s and children’s rights, Anna uses an intersectional lens to advocate for women of color and to educate others.

During her time as an undergraduate student at Stanford University, Anna took from what she’d seen in her parents’ work and began honing her own identity as an activist. As the First Partner of Stockton, CA, she co-authored the first-ever “Report on the Status of Women in Stockton” to guide future policy decisions with the experiences of diverse women in mind. She’s published articles featured in the Huffington Post, For Harriet, Darling Magazine and Blavity, on issues ranging from mass incarceration to the forced sterilization of Black women, as well as the importance of feminism, intersectionality, and inclusivity. Throughout all her work and writing, she draws on her personal experience and extensive research to examine and make relevant gender and race issues in the US, especially the pervasive erasure of Black women.

In this incredible debut book, The Three Mothers, Anna celebrates Black motherhood by telling the story of the three women who raised and shaped some of America’s most pivotal civil rights heroes: Martin Luther King, Jr., Malcolm X, and James Baldwin. Alberta King, Louise Little and Berdis Baldwin were all born at the beginning of the 20th century, all were forced to contend with the prejudices of Jim Crow as Black women, all forged their own unique paths, using their beliefs and talents to shape not only their children but those around them, and all three had to bury their children, two of them after losing their sons to gun violence.

In these mothers and their stories, amidst the pain and grief, there also existed vibrancy, love and conviction. One of my biggest takeaways from my conversation with Anna is the importance of acknowledging the continued injustices that Black women endure today and that although Black women continue to experience tremendous grief, they also experience joy and they are not “a conquered victim,” but are living through life as whole human beings.

My Mother’s Day wish is that you will find time and space to slow down and truly listen to Anna’s insights about the mothers whose stories she so beautifully tells, that you will get and read her book The Three Mothers, and that you’ll join me in saying “yes” to Anna’s challenge. She asks that all of us advance our understanding of different forms of motherhood. Picking up books she says, especially those that focus on Black mothers and Black motherhood, can bring healing for everybody.

P.S. Know someone who would love this conversation? Pay this forward to a friend who may be interested.

This Episode is Dedicated by: Sybrina Fulton

As Fulton traverses the globe, she passionately embarks on a journey designed to bring awareness to senseless gun violence and serves as an advocate to families, the catalyst for her dream project, the “Circle of Mothers.” Winning the national support of president-elect Hillary Clinton, Fulton rallied to the forefront in 2016 at the Democratic National Convention with a cadre of African American trailblazing women known as “Mothers of the Movement.” The women, connected by tragedy, are the inspiration behind  “Black Lives Matter.”

She created the Circle of Mothers to bring together mothers who have lost children or family members to senseless gun violence for the purpose of healing, empowerment, and fellowship towards the larger aim of community building.

Give a Mother’s Day Gift: Help mothers heal from the loss of a loved one by supporting and donating to the Circle of Mothers, Sybrina’s weekend retreat for mothers who have lost a child to gun violence. You can support the cause here.

Special thanks to Jill Daniel of Happy Women Dinners for introducing us to Anna and her work!

Anna invites us to think about what we can all read to advance our understanding of different forms of motherhood. Picking up books that focus on Black mothers and Black motherhood can bring healing for everybody. The more we are informed, the more conscious we become.

Anna’s next recommendation after finishing her book: The Power of Purpose by Alicia Garza which begins with a powerful description of the impact of Alicia’s mother on her.

Anna Malaika Tubbs is an Author, advocate, educator, and a Ph.D. candidate in Sociology at the University of Cambridge. Anna grew up abroad in Dubai, Mexico, Sweden, Estonia, and Azerbaijan. Influenced by her exposure to all kinds of cultures and beliefs, Anna is inspired to bring people together through the celebration of difference. Motivated by her mother’s work advocating for women’s and children’s rights around the world, Anna uses an intersectional lens to advocate for women of color and educate others.

During her time as an undergraduate student at Stanford University, Anna took from what she’d seen in her parents’ work and began honing her own identity as an activist. She served as the president of Stanford’s Black Student Union when she was only a sophomore and she was also the Executive Director of Stanford’s Alternative Spring Break. In these roles, she organized rallies and events focused on the concerns of the Black community, she fundraised money for women’s clinics in the Bay Area and grew her passion for advocacy and social justice.

As the First Partner of Stockton, CA, she co-authored the first-ever “Report on the Status of Women in Stockton” to help guide future policy decisions with the experiences of diverse women in mind.

Anna is also a diversity, equity, and inclusion consultant who has worked with companies and individuals interested in progressing their DEI goals.

Anna has published articles on issues ranging from mass incarceration to the forced sterilization of Black women, as well as the importance of feminism, intersectionality, and inclusivity. Her work has been featured in the Huffington Post, For Harriet, Darling Magazine, and Blavity. Her first book, titled The Three Mothers: How the Mothers of Martin Luther King, Jr, Malcolm X, and James Baldwin Shaped a Nation, is being published by Flatiron Books in February 2021.

Grab a copy of Anna’s The Three Mothers: How the Mothers of Martin Luther King, Jr., Malcolm X, and James Baldwin Shaped a Nation HERE!

Happy Mother’s Day! I hope you’ll seize this holiday as an opportunity to say “yes” to yourself. We’ve declared it Mother’s Quest May in our community and have so many wonderful things to share with you as the month progresses:

Join the free Facebook Group and sign up for email updates at www.mothersquest.com to learn all the details and come along with us during this special month.