Focus on our Goodness: A Framework for my Activism Inspired by my Four-year Old 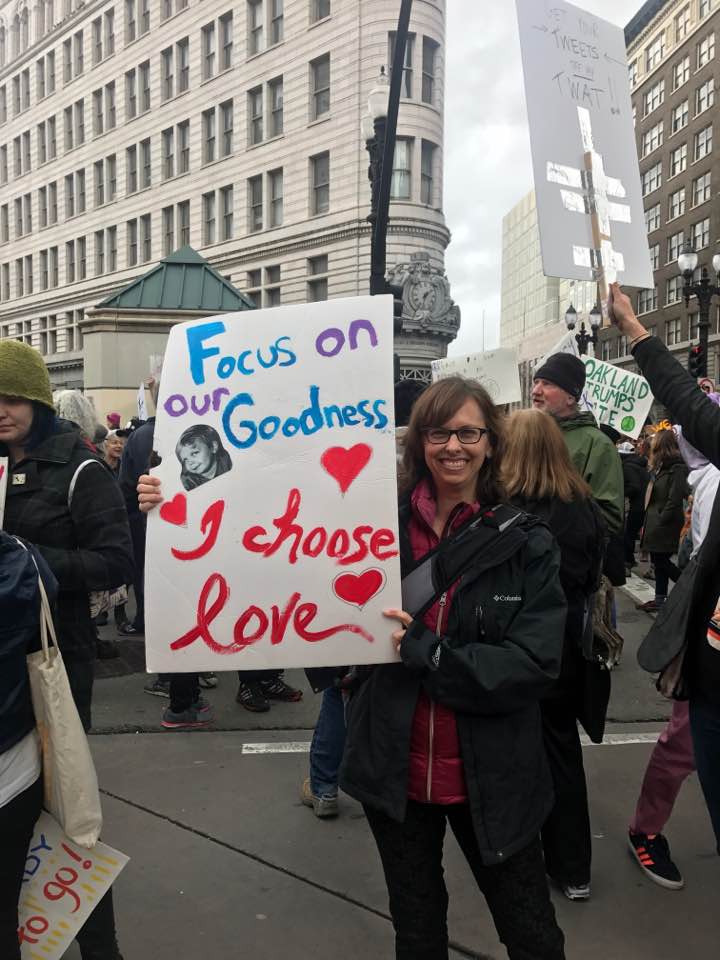 Focus on our Goodness. I Choose Love.

In the days after Trump was elected I entered a period, like many others I know, which I now recognize as the stages of grief. Just before launching the Mother’s Quest Podcast, I reached “depression,” and found myself in a state of paralysis, unable to do the “work” needed to move forward with something that had previously inspired me.

Thankfully, I recognized something needed to shift and I reached out for help. In a blog post I wrote for Medium, I share how spiritual healer Navjit Kandola, from Episode #1 of the podcast, helped me honor and integrate my feelings, and create an intention for moving forward.

Reflecting on a childhood experience when I faced a ferocious dog that had previously terrified me, I determined that I would not live in fear. And that the only form of “acceptance” I would take in this grief cycle would involve me accepting an expanded version of myself, that of an activist. I knew I would need to be my own version of an activist…would need to do this in my own way to stand in love, not fear, to champion what I believe in.

Reminder from my Son

One of the amazing things about being a mother is the reciprocal transformation that is possible between parent and child. This has become one of the founding principles of Mother’s Quest, a key in the “Theory of Change” I crafted that guides me.

On the day of the inauguration, I was reminded of the power of this reciprocity. I was watching coverage of the day, and voiced my thoughts to my four year old. It went like this:

Me: Trump is our President now

J: Is he going to be nicer now?

J: I think he is. Look, he is giving high fives.

Me: You know what I do know Jake, we should focus on what we can control and be the best people we can be.

Me: So, what should we focus on Jake?

His exact words, to focus on “our goodness,” bolstered me and inspired me to show up at the Women’s March in Oakland the next afternoon with a sign that read “Focus on our Goodness. I Choose Love.” That day, I felt a powerful collective solidarity, hopefulness and connection. Contrary to what some imagined, the energy there was incredibly positive, like we were standing, not in opposition or in a place of negativity, but for the ideals we hold dear.

Lean into love and not division

But today, in the wake of a heart-breaking weekend where hundreds were detained after President Trump’s executive order on immigration, and Steve Bannon, a known white supremacist, was placed on the National Security Council, I found myself falling into the abyss of fear again.

No doubt, these events were compounded for me personally, as a Jewish woman, by the fact that the President purposefully excluded a mention of Jews in his official statement last Friday acknowledging Holocaust Remembrance Day — a move that seems to be flirting with Holocaust denial, at a time when we most need to remember the lessons of that chapter in history.

But, I am committed to staying awake in this chapter of my life, to inspire my children by my example, and to learn from them.

And, I am also paying attention to the “signs” that speak to me with a common message. To my interview on Episode #7 with Jenjii Hysten, where we discuss how, after her raw and honest post connected to Black Lives Matter, we have begun finding our common humanity as mothers of sons, across divides of race, class and religion.

To this article I read today about veterans coming to help when Muslims were blocked at airports.

And to Nancy Netherland’s conversation with me on Episode #10, coming out Thursday, about how Victor Frankl, a Holocaust survivor and author of Man’s Search for Meaning, helps her to “widen the space,” before acting. This practice has helped her forge connections with parents with widely differing political beliefs, united by their common love for their chronically ill children.

Part of my “Mother’s Quest” — Nurturing my inner activist

So, with these messages from my guides, including my four year old son, I am turning down the volume on my television today, stepping away from my Facebook feed, and focusing on seemingly small, but important action steps focused on our goodness, our civil rights, and our common humanity.

I just sent a message to a Muslim friend to ask if there is a local mosque he can connect me to and how I can support, I have called my local representative to request that she take a firm stand against Trump’s immigration ban and appointment of Steve Bannon to the National Security Council, made a donation to the ACLU, emailed another friend, a Trump supporter, with genuine curiosity, to understand his views in the midst of all that is happening, and when I next see my sons later, I will greet them with my full presence and ask them what they did to help someone else today.

Focus on our goodness. Stay awake. And nurture my version of activism, rooted in love and not fear.

What messages are calling to you right now? What do you do to make sure fear doesn’t consume you? What is your framework for action? I would love to learn from you…Please share in the comments below.

With love and goodness,