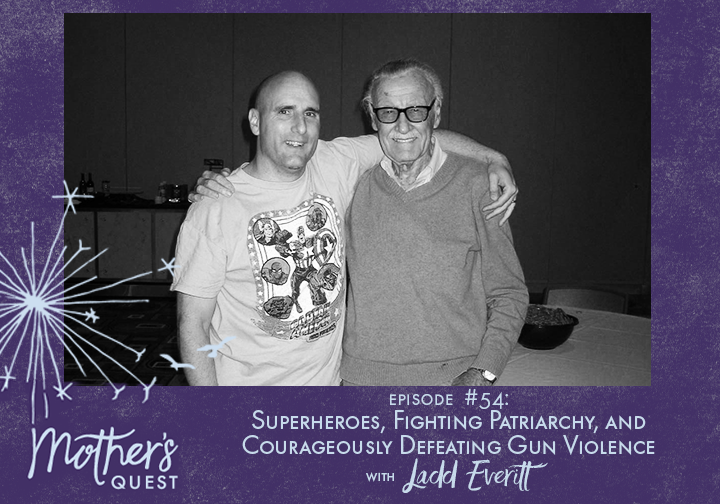 I’m honored to share this episode of the Mother’s Quest Podcast, the second in a series I’m recording for the Women Podcasters in Solidarity Initiative on the subject of gun safety and the intersectional impact of gun violence on our communities.

As the mother of two boys, I was interested in having a conversation with an expert on this subject who’s also a man and a father and I’m so grateful to have found one willing to go deep and be vulnerable in gun prevention advocate Ladd Everitt.

Ladd has been involved in this movement since 1993, when his life changed forever after a man boarded a rush hour train on the Long Island Railroad and opened fire with a handgun, killing six and wounding 19. This train was the one Ladd took regularly and he realized that it easily could have been him killed that day.

That moment sparked Ladd to attend the Million Mom March in 2000 in Washington DC, where despite the fact that he was a single man with no children, he found himself stepping into leadership for a local chapter and working alongside mothers for gun safety.

More than two decades later, he has become a father himself, and is still deeply committed to this work. After 10 years as a strategic communications and social media specialist with the Coalition to Stop Gun Violence, Ladd took the position he holds today as Director of One Pulse for America, a gun violence prevention group established after the Florida Pulse Nightclub shooting by acclaimed actor/LGBTQ rights activist George Takei.

Ladd brought honesty and clarity to the conversation as we traced his E.P.I.C. life journey, from growing up as a young boy influenced by Marvel comics, to stepping into his own powers as a caring father and a decades long gun control advocate.

I appreciated Ladd’s humility as he expressed how the trauma of doing this work has impacted him, his own growing pains as he’s learning about and confronting racism and patriarchy, and the importance of giving the microphone and following the lead of young people, who he says are the emotional and cultural leaders of the movement today.

Ladd leaves us with hopefulness about the possibility for real change after the mid-term elections along with a challenge to hold our elected officials accountable, beginning with a specific request of Nancy Pelosi to focus on new and bold, not watered down, gun policy changes.

P.S. Know someone who you think would appreciate this episode? Push forward and share this conversation!

This Episode is Dedicated by:
Helgi Maki

Helgi dedicated this episode to all mothers affected by cycles of gun violence, who witness and deal with its aftermath for generations, especially the mothers affected by the terrorist attack in Pittsburgh, in the anti-Semitic hate crime shooting at the Tree of Life Synagogue on Saturday, October 27, 2018. They deserve our heartfelt, meaningful support in the wake of life altering gun violence.

Helgi is a lawyer and the founder of traumainformedlaw.org – an initiative to help justice professionals and communities reduce the impact of  trauma and violence on public health.  You can learn more about her work at the links below.

For this week’s challenge, Ladd challenges us to focus on what he believes is the most important issue related to gun safety: to get serious about disarming violent people in our country.

Ladd asks us to follow through on his One Pulse America Action Alert: To Tell Presumptive Speaker Pelosi to Make Assault Weapons Ban a Priority

I want to let you know about a special end of the year campaign as part of the Women Podcasters in Solidarity Initiative to raise money for the mothers, caretakers and activists on the frontlines of gun violence prevention. To make sure you get notified about the campaign, sign up for email updates at www.mothersquest.com and follow the Mother’s Quest page on Facebook. You can also reach out to me at julie@mothersquest.com if you’d like to be one of the first to “seed” the fund with your contribution.

Mother’s Quest is available on Pandora!

Mother’s Quest Podcast is one of the fists podcasts in the all-new Pandora podcast platform! Just search for Mother’s Quest on the app.