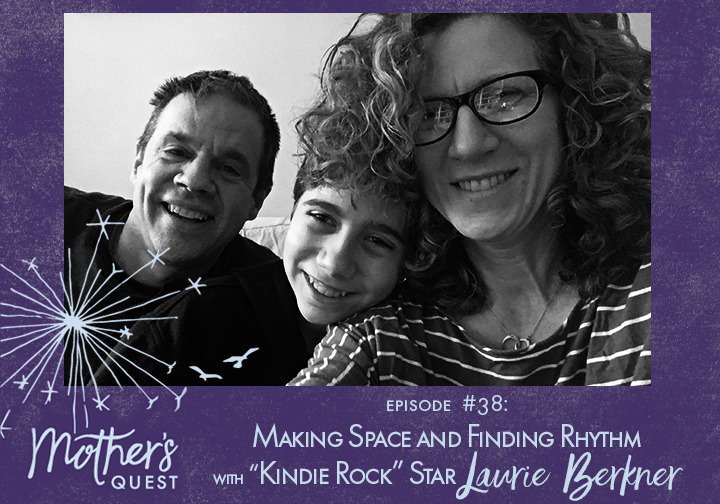 I’m honored to share this Episode #38 of the Mother’s Quest Podcast with someone who even my children were excited I was interviewing… best-selling, award-winning, children’s recording artist Laurie Berkner.

Widely recognized as the uncrowned queen of children’s music, Laurie’s albums, released on her own label Two Tomatoes, have been best sellers beloved by children and adults alike.  Her debut DVD, which went quadruple platinum, was the first-ever indie children’s music DVD to enter Billboard’s Top Music Video chart at #1. Laurie’s twelfth album, Laurie Berkner: the Dance Remixes, was released in September 2017.

Laurie’s music bridges a divide between parents and their children and invites connection, joy and meaning. In our conversation, I was compelled by the stories Laurie shared about families whose children have cancer and listen to her music for comfort in the hospital or whose children have autism and their first words were the names of Laurie’s songs.

For her, bringing opportunities for connection and making space for creative expression is her true mission and has begun to take many forms. I was fascinated to learn about the unplanned path that brought her from preschool teacher to children’s musician, and how the tenets that inform her music training program, to stop talking and “put it in the music,” to let children express themselves in their own voice, and to follow children’s rhythm and leadership are powerful metaphors for parenthood and life.

I loved every moment of this conversation, but especially the end, where Laurie recounted a recent E.P.I.C. snapshot moment with her own daughter and then closed us out with her guitar in hand singing my favorite song of hers, “Moon, Moon, Moon.”

I felt so enriched by this conversation, and following Laurie’s guidance, I’m committed to creating more space for emotion, connection, play and music with my children.

But, there’s also something else. The day after I recorded this episode and had the honor of hearing Laurie sing about the moon, I took in the power of the Lunar Eclipse and the rare Blue Moon, sending an email to Laurie to note the synchronicity of it all. I was struck again to learn that as I release this episode, Dr. Roz, the woman beautifully honored in the dedication for this episode, would have celebrated her birthday this week, if she were still alive today.

So, I also leave this experience with renewed faith in ripple effects beyond what we first imagine and a reverence for following the rhythm in our lives, if we make the space to listen.

Make space for connection and music with your own children. Use music in your daily routine by turning an ordinary task with your child into a song.

Resources Mentioned in this Episode: Spring is an amazing time to more fully seed the E.P.I.C. Guideposts in your life. I’m opening a limited number of one-on-one coaching spaces for a 90 day coaching package that includes bi-weekly hour-long coaching sessions where I will help you mindfully close the chapter of the last season, identify your vision for what’s ahead, set strategic action steps for moving forward, and provide inspiration and accountability along the way. Email me at julie@mothersquest.com to set up a free discovery call and learn more.

I’m excited to announce that the first founding Mother’s Quest Virtual Circle has been filled. If you’re interested in a future circle, and want to receive notice when the applications open again, please add your name to this wait list. julie@mothersquest.com Would love to have you in our weekly E.P.I.C. Life Check-In on Tuesday, from 12N-1PM pm via Video on Zoom

We’ll create connections within the Mother’s Quest community, reflect on how we feel along the E.P.I.C. Guideposts this week, and set an intention for the week.

Time for personal introspection, group accountability and community-building all packed into one hour. Are you In? Join the Mother’s Quest Community to RSVP and find the zoom link to join. www.mothersquest.com/community

If you’re finding value from the Mother’s Quest Podcast and would like to get more involved, please join us in the Mother’s Quest Facebook Group, help us find more like-minded mothers on a quest by spreading the word and sharing your favorite episodes, and make a donation or apply to dedicate an episode. You can also share your story on the Mother’s Quest Blog.