Different is not Deficient with Normal Sucks Author Jonathan Mooney 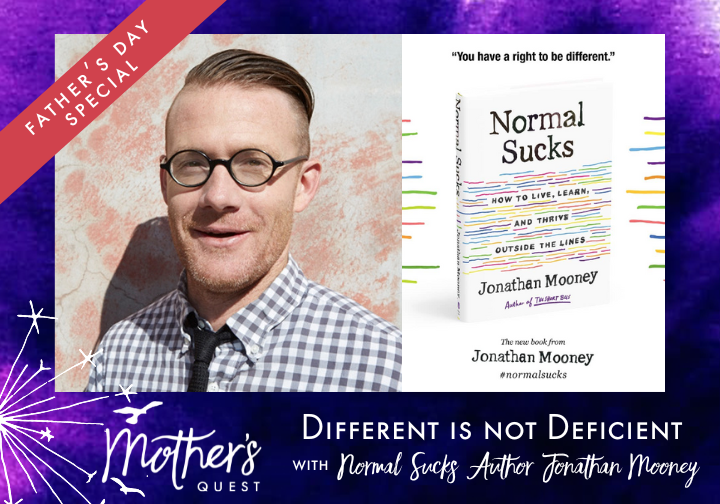 Welcome to this year’s special Father’s Day episode with Jonathan Mooney, an amazing father who is also a dyslexic writer, speaker, activist, and self-described “do-gooder.” Jonathan didn’t learn to read until he was 12-years-old, was told he would be a high school dropout, and end up in jail. But, instead, he forged a path to Brown University where he co-founded an organization and co-wrote a book to help neurodivergent students like himself succeed in college, all on the way to graduating with an honors degree in English.

He’s since become a champion for neurological and physical diversity for more than two decades, and his award-winning advocacy projects have been featured in major media outlets including the New York Times and Los Angeles Times, HBO, NPR, Fast company, and many others.

In this episode, Jonathan goes deep and wide about the pervasive impact of institutionalized and cultural ableism and his quest to help himself and others with differences understand they are not deficient. We hear the powerful story of Jonathan’s own mother and how she inspired him to reframe his language and his thinking about his differences. And Jonathan walks us through how systemic change can not only make our world more inclusive for people with differences, but through universal design, make things better for everyone.

You’ll want to listen to this episode with a pen and paper, prepare to rewind and listen again, and then get ready for a part two with Jonathan and my neurodivergent son Ryan. He’s off to college in the fall and eager to learn from Jonathan, not only about how he can thrive but also about how he can use his voice for advocacy and help make his university more inclusive for all.

I hope you enjoy this first of two with Jonathan Mooney and have a wonderful Father’s Day!

Jonathan Mooney is a dyslexic writer and activist who did not learn to read until he was 12 years old. He is a graduate of Brown University and holds an honors degree in English Literature. At Brown, he became the co-founder of Project Eye-To-Eye, a widely duplicated mentoring program for disabled students. He is also a winner of the prestigious Truman Scholarship for graduate studies in creative writing and education and was a national finalist for the Rhodes scholarship.

Jonathan Mooney’s work has been featured in The New York Times, The Los Angeles Times, The Chicago Tribune, USA Today, HBO, NPR, ABC News, New York Magazine, The Washington Post, and The Boston Globe. A nationally recognized advocate for neurological and physical diversity, he’s been speaking across the nation about neurological and physical diversity for two decades, inspiring those who live with differences and calling for change. He has published three books: The Short Bus, Learning Outside the Lines, and Normal Sucks.

Stay tuned for a special Part Two conversation with Jonathan and Ryan, who is headed to university in the fall, about how to support neurodivergent students in college.

​​The judges of normality are present everywhere Jonathan says. Jonathan’s journey of thriving came because somebody, Dave Cole, wouldn’t fake being normal. Jonathan’s challenge to us is to stop faking normal. Celebrate every day and in every person the power of different.

This Episode is dedicated by: Briar Harvey

As a storyteller and systems witch for more than a decade, Briar has helped so many people figure out what their next step is, and how to take life as it comes. With her first book underway, she still continues to write about business, productivity, feminism, trauma, and mental health in her own little corner of the internet.