Throwback Thursday: A Call for Kinetic Partnership with While Black’s Darius Hicks 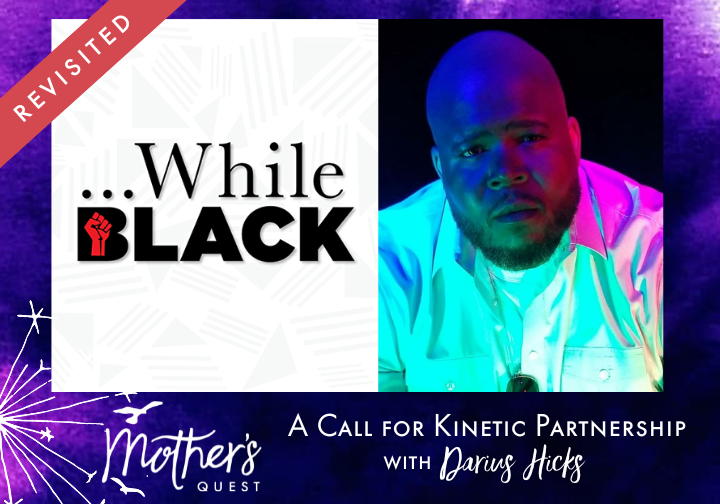 For this Throwback Thursday, just after Father’s Day, I knew I wanted to bring you this episode with my friend, an incredible father and podcaster at the While Black Podcast, Darius Hicks.

This past week in the United States, in addition to Father’s Day, we also acknowledged Juneteenth (short for “June Nineteenth”) an annual commemoration of the effective end of slavery in the United States after the Civil War. It came when federal troops arrived in Galveston, Texas in 1865 to ensure all those enslaved were freed, a full two and a half years after the signing of the Emancipation Proclamation. It’s considered the longest-running African American holiday and last year in 2021 became a federal holiday.

For those of us who are not Black, Juneteenth is an opportunity to learn more about the history of slavery, to reflect on how much more is needed for Black people to be truly free in this country, and to recommit to antiracism.

Just over a month since a white gunman killed 10 Black people at a supermarket in Buffalo, one of the deadliest racist massacres in recent U.S. history, this conversation with Darius is a necessary call to action to learn more and identify how we can be part of the change that is needed.

Darius gifted us with exceptional insight, perspective, and vulnerability in this conversation. I’m honored to share it with you again.

Darius has always displayed an entrepreneurial and activist spirit. Since his youth, he has dedicated his time to those around him in hopes of bettering them while he better himself. It began by volunteering as a camp counselor from middle school through high school, and grew via mentorship and tutoring in college all the way to his membership role in the 100 Black Men and as an advocate for African Americans through his work on the While Black Podcast. Vince wholeheartedly believes James Baldwin’s quote “To be Negro in this country and to be relatively conscious is to be a rage almost all the time”. However, he chooses to channel that rage into a place that allows him to change the narrative on black folks while he helps to empower those same black folks

Earning his undergraduate degree in Civil Engineering from Southern University A&M in Baton Rouge LA (1999) and his MBA from Queens University in Charlotte NC (2005), Vince has gained valuable experience in multiple industries

He has excelled in multiple industries and enjoyed a career spanning 20+ years with opportunities in Engineering, Consumer packaged goods, Corporate retail giants, and now the Social/tech industry

In addition, he is a successful entrepreneur and founder of Aveo Big and Tall Golf Apparel which rose to become the #1 big and tall golf apparel offering in Golfsmith stores and was distributed nationally and internationally via various outlets including but not limited to Dicks Sporting Good, GolfSmith, and Golf Galaxy. He has since sold the rights to the Aveo name and divested from the company.

However, he has altered his focus by aligning his passions with his promise and ensuring his time is invested accordingly as he focuses on improving the black world and the global community through and with black people. His latest endeavor is laser-focused on impacting and improving the people around him. Specifically, he is the creator and co-host of the While Black Podcast a podcast focused on empowering, educating, and inspiring African Americans to go and grow. While Black tells stories by, from, and for African Americans and pairs those stories with expert and credible guests who can communicate wisdom and success strategies helping us to achieve, accomplish, and overcome.

Darius gave us a threefold challenge:

This Episode is dedicated by: Herve Clermont

Herve Clermont is an actor, voice-over artist, and Host, and was a National brand ambassador for Remy Martin for over 8 years. He discovered his passion for acting at Georgetown University, where he was in school as a pre-med major, and needed to fulfill electives.

He is the son of a proud Haitian Doctor and nurse, he always joked he “could play one.” He began his professional acting career in 2000 with a contract Role on One Life To Live, and has co-starred and guest-starred on various prime-time shows: Law & Order, CSI Miami, Cane, 24, Criminal Minds, Scandal, Guys with Kids, New Girl, The Mick, NCIS, NCIS LA, Dice, Veronica Mars, Mr. Iglesias, and many others.

Herve has been recurring on John Singleton’s Snowfall for the last 3 seasons, before landing a series cast member on Tyler Perry’s Ruthless. His voice-over career includes announcing at celebrity fund-raisers, branding and promotional videos, industrials, and promotional TV and radio commercials, including ones for Beyonce, an international Jazz festival, and currently is the voice behind Cintas and on camera.

Herve’s hosting experience includes live events with BMW, VH-l, Harmon/ Kardon, and Remy Martin. He has also worked on a pilot in front of the camera as a Studio host in the entertainment industry, interviewing celebrities and keeping the audience up-to-date with the latest entertainment news.

Visit The J.E. Clermont Foundation Hope for the Children of Haiti for more about the Foundation that furthers Herve’s father’s legacy

Instagram @Plantinghopela – to learn about Herve’s wife’s venture that creates beautiful plants with contributions supporting the Foundation in Haiti and charitable efforts in LA.

Check out the full shownotes from the original episode here: Ep 75: A Call for Kinetic Partnership with While Black’s Darius Hicks